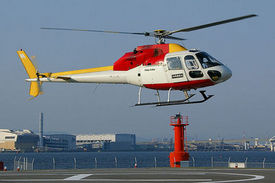 West Windsor, N.J. — Police are investigating a helicopter crash that killed a retired New York City police officer Saturday, September 15, 2012. The aircraft went down shortly after noon in a cornfield near Route 1 and Quakerbridge Road in West Windsor, the Washington Post reports.

Michael Scarfia, 65, of Staten Island, N.Y., was piloting an Aerospatiale AS355 twin-engine helicopter when it went down and burst into flames upon impact. Scarfia was the only person in the helicopter at the time.

No one on the ground was injured.

Witnesses reported seeing a flock or birds that appeared to have made contact with the helicopter just before it crashed, but those claims are still being investigated.

Others saw pieces of the aircraft coming apart, including the main rotor of the helicopter. They also heard grinding noises and possible explosions as well.

Scarfia reportedly did not make any emergency transmissions or report any trouble prior to the helicopter going down.

The West Windsor police, the Federal Aviation Administration (FAA), and the New Jersey state police are investigating the aviation accident.