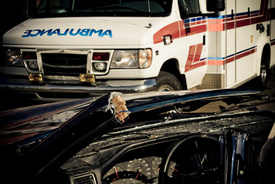 According to reports, the car was traveling northbound in the express lane when it slowed down for traffic. But, the semi-truck that was following the car didn’t slow down in time and slammed into the vehicle.

The impact of the collision pinned the car against a concrete barrier and was dragged for about a half-mile before the semi hit another vehicle, pinning that vehicle underneath the semi.

The collision ejected one person inside of the vehicle and trapped four others for over two hours.

Responding emergency crews rushed three people to an area hospital, where two victims were in critical condition and the third was in stable condition.

The crash is under investigation. The identities of the victims are being withheld at this time.

It is unknown if the truck driver will be charged for the wreck.