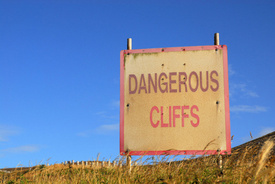 Englewood Cliffs, NJ — Police are investigating the death of a man who fell from Palisades Cliffs at the Rockefeller Lookout. The man fell just before 11 p.m. at the lookout that is located along the northbound lanes of the Palisades Interstate Parkway, just past Exit 1, reports NJ.com

According to witnesses, the man was beyond the sign that warns people not to approach the cliff’s edge.

The Englewood Cliffs Fire Department, East Bergen Rappel Team and the New York Police Department Aviation Unit were all called to the scene to conduct a search and rescue of the man.

The man, who remains unidentified, was found directly where he reportedly fell. He was pronounced dead at the scene.

Police are still trying to confirm the victim’s identity. The fall is under investigation, but they do not believe it was suspicious.