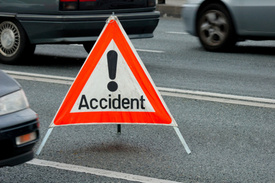 According to reports, Muhammad Wilkerson was driving northbound on the Garden State Parkway, when his 2011 green Dodge Challenger hit the rear of a 2011 Toyota Sienna. The impact of the collision caused Wilkerson’s vehicle to overturn and trap him inside.

Wilkerson was able to extricate himself before state troopers arrived at the scene.

Responding emergency crews rushed Wilkerson to University Hospital in Newark, where he was treated for “minor injuries.” He reportedly received several stitches in his forearm, but is expected to be ready for training camp next month.

Police reported that alcohol did not play a role in the accident. But, the cause was deemed Wilkerson’s fault. He was cited for “careless driving” and “failure to maintain a lane.”

The investigation has been closed.