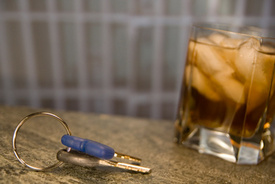 Brooklyn, NY — A Brooklyn woman was arrested on drunk driving charges after she allegedly drove her Mercedes through a Long Island home. The car plowed through the home on Monday, May 28, 2012, at 4:05 a.m. in Huntington, reports KBOI News/Talk 670.

According to reports, Sophia Anderson, 21, failed to make a turn at a t-intersection when she drove her Mercedes convertible through the home—taking out everything with her, including the kitchen sink.

The vehicle also took out furniture, dishes a stove into the backyard of a 90-year-old woman’s home.

Anderson sustained only a few scrapes and bruises to her face. A male passenger was uninjured in the wreck.

Although the homeowner and a caretaker were inside the house at the time, they were not injured.

Anderson was taken to Huntington Hospital for treatment. She refused a breathalyzer test and was booked at the Fourth Precinct.

Prosecutors reported that a preliminary field test at the crash scene indicated a blood-alcohol reading of 0.30. Each alcoholic drink raises the level by about 0.02. The legal limit is 0.08. Bail was set at $50,000, the Washington Post reported.