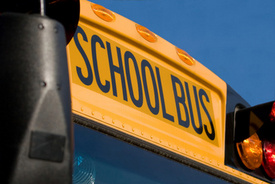 Lehigh County, PA — A traffic accident involving a school bus left over a dozen students with injuries following the Friday evening, May 11, 2012, crash. The school bus accident occurred on Hamilton Boulevard (Route 222) near the on-ramp to Interstate 78 East, on the border between South Whitehall and Lower Macungie townships, reported Lehighvalleylive.com.

According to reports, ninth-grade students from Pennridge High School in Perkasie, Pa., were returning from a trip to Dorney Park & Wildwater Kingdom when the accident occurred.

The buses were headed south on Route 222 and were turning left onto the I-78 ramp when the first bus made a turn on a green arrow light. But, by the time the second bus attempted to pass through the light it had already changed to a solid green light, and northbound traffic was beginning to move through the intersection. The second bus tried to make the turn anyway, at the same time as an Impreza was coming through the intersection. The bus driver swerved to avoid a collision, but instead slammed into a traffic light pole and the Impreza hit the front of the bus.

The two other school buses were involved in the wreck.

Responding emergency crews transported fifteen people, including the driver of the Impreza, to area hospitals for treatment of injuries. Eight people were reportedly taken to Lehigh Valley Hospital in Salisbury Township, and seven others were taken to St. Luke’s University Hospital in Fountain Hill.

The school bus driver was cited for failure to yield to oncoming traffic while making a left turn. The identity of the bus driver has yet to be released.