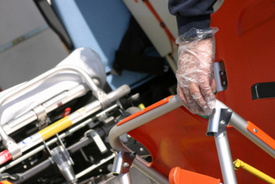 East Greenwich, RI — A bus accident injured over 30 people on Monday, April 16, 2012, when it collided with a SUV on Route 2. The bus accident occurred around 3:30 p.m. between Route 2 and Frenchtown Road, reported NECN.com.

According to police, the SUV and bus collided in the northbound lanes for unknown reasons. The cause of the wreck remains under investigation.

The Associated Press reported that the bus driver was taken to Rhode Island Hospital for treatment of serious injuries. The other injuries sustained in the crash were reportedly minor.

The bus reportedly transported students from the Jewish Community Day School on a field trip to Newport.

The identities of those injured in the automobile accident are being withheld at this time.

Investigations into the bus and SUV wreck are underway.