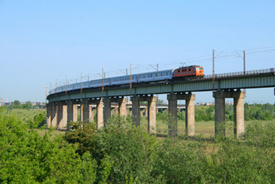 The bus was carrying 28 people, including the driver when it slammed into the bridge at approximately 2:30 a.m., on the Onondaga Lake Parkway in Salina, a suburb of Syracuse, according to officials.

By 8:30 p.m. on Saturday, five passengers remained hospitalized. Those who lost their lives included Kevin Coffey, 19, of Manhattan, Kansas; Ashwani Mehta, 34, of India; Benjamin Okorie, 35, of Malaysia; and a New Jersey woman in her teens who was not identified.

The Post-Standard of Syracuse identified the bus driver as 59-year-old John Tomaszewski, of Yardville, New Jersey.

The bus was on its side after the crash. It struck the bridge between two large signs declaring the clearance height of 10 feet, 9 inches. The top of the bus was completely destroyed.

The driver of the bus suffered head injuries, but was able to speak with investigators, according to Onondaga county Sheriff’s Deputy Herb Wiggins.

There was no indication of drinking or drug-use by the driver.

The bus had departed from Philadelphia at 10 p.m., Friday and was scheduled to stop in Syracuse and Buffalo, according to Don Carmichael, a senior vice president at Coach USA, the operator of Megabus.

The route typically travels into Syracuse on I-81 and heads straight for a depot for a 30-minute rest stop, but the driver was on a lakeside parkway that may have been unfamiliar, according to Carmichael. The parkway and the depot share the same interstate exit, and the driver who chose the wrong fork at the bottom of the ramp would find himself on the parkway. Upon entering the parkway, it is only a short distance to the bridge, with nowhere to turn around, according to the Inquirer.

Carmichael told the press the remaining 17 passengers who were released from a hospital were taken to a hotel so they could rest and decide whether they wanted to continue their trip.

Megabus has operated the double-deckers since 2007.