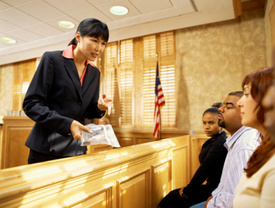 Plattsburtgh, NY – A 19-year-old man began trial Monday, August 30, 2010, on accusations of vehicular homicide for a crash that happened in February of 2009. Joshua Bombardier claims he was not the driver in the crash that killed three people, as reported by WCAX News.

Bombardier, his friend, 18-year-old Kyle Bushey and three others were traveling in a Ford Mustang on Route 11 in Clinton when the driver lost control and hit a snowbank. The vehicle flipped several times and all people inside were ejected. No one was wearing a seatbelt.

The vehicle belonged to Veronica LeClair. She, along with her 15-year-old son and 15-year-old stepson were in the car as well, but did not survive the crash. Bombardier and Bushey suffered serious injuries. Bushey suffered a traumatic brain injury and underwent weeks of rehabilitation.

Bombardier and Bushy originally claimed Veronica LeClair was driving the vehicle, which was believed to have reached speeds close to 100 mph. Bushey changed his story several months later, and accounted for the discrepancy with, “I was getting pieces of it while I was in rehab, then at home. It camp up at once.”

He told the jury what he remembered on Monday, describing the events as, “We were going pretty fast, think he missed a gear and the back tires locked. I held onto the seat in front of me. I looked down and we were going pretty good.”

According to prosecutors, Bombardier told Bushey to lie to police because they were the only survivors. He allegedly provided tips on how to pass a lie detector test. Bushey later agreed to make a series of four recorded phone calls, whereupon prosecutors allege Bombardier made an incriminating admission.

The defense claims Bushey is out for money, and Bombardier is the only option. A few weeks after Bushey changed his story, he sued Bombardier for unspecified damages.

The families of the LeClairs say they just want to know what happened.

Prosecutors do not have any physical or forensic evidence that places Bombardier in the driver’s seat.