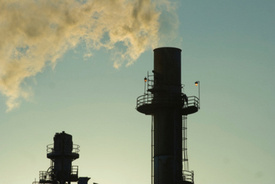 Houston, TX – A woman filed a lawsuit against BP Plc’s North American subsidiary on Thursday, August 19, 2010, that alleges pollution from a refinery in Texas City, Texas contributed to her child’s death, as reported by Reuters. The suit seeks $10 billion in damages.

The lawsuit is joining thousands of others seeking damages for excess pollution from the refinery. Earlier this month, BP agreed to pay a $50.6 million fine to the U.S. government for safety lapses that led to an explosion that took the lives of 15 workers.

While a BP spokesperson told the press, “We are deeply saddened to hear of the death of a child in our community,” he went on to explain, “Given the circumstances, we will not have further comment on this lawsuit.”

BP is also facing a $10 billion class-action lawsuit for the April-May release of 500,000 pounds of excess pollution, including 17,000 pounds of benzene, a harmful gas, according to Reuters. BP said air monitors around the refinery’s perimeter did not detect pollution excesses after a malfunctioning hydrocracker triggered the release.

The mother of the child who died says doctors could not identify what caused the child’s pneumonia. Six-month old Julius Provost died June 23. The medical examiner ruled the cause of his death as undetermined, but noted the child had fluid in his lungs.

The woman’s attorney told the press, “It’s almost like the baby drowned to death in its own fluids…BP will continue to downplay this and say their monitors failed to pick this up.”