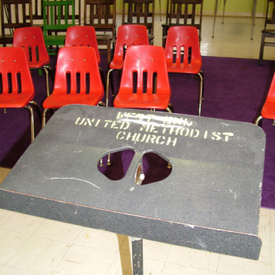 West Hartford, CT – A high school choral teacher was arrested Thursday, August 12, 2010, after police were given a discarded diary documenting a student’s relationship with the 42-year-old man, as reported by The Hartford Courant.

Joseph Anthony Marino, of Wethersfield, a teacher at Conrad High School in West Hartford, was charged with two counts of second-degree sexual assault, a felony. He is currently free on $50,000 bond and due back in court August 26.

The discarded diary was that of a student of Marino’s. The pages recount a physical relationship that began in December 2009 and ended in July, only after the girl’s parents confronted Marino about the series of emails sent between the two.

While police did not identify the individual who turned the diary in, the arrest warrant reported that the school’s ex-principal Tom Moore helped to identify its author. Moore, who is now the Assistant Superintendant, stated, “The safety and well-being of our students are our highest priority and we take these allegations very seriously.”

According to court records filed Friday, August 13, the journal’s author wrote about fear of “potential consequences, both legally and shamefully.”

The student graduated from the high school in June. She turned 18 this spring.

She reported to police she and Marino emailed and text-messaged each other every day, and that their relationship became physical late December, 2009.

The warrant also documents that the girl’s father supplied police with a copy of an email that Marino sent to the teen’s home on July 27. It apologized for “poor judgment,” “a lack of professionalism” and “a minor cessation of reason.”