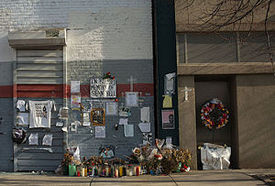 New York, NY – The family and friends of Sean Bell, the victim of a police shooting incident in November 2006, settled a civil case against the city for a sum exceeding $7.1 million, as reported by NY1.com.

Bell was unarmed and in his car when he was shot and killed by undercover police officers outside a nightclub in Jamaica, Queens in November 2006, the day of his wedding.

Bell’s two friends, Joseph Guzman and Trent Benefield were shot as well, and will receive parts of the settlement.

There were three officers involved in the shooting. While they were charged for criminal offenses; all were acquitted.

The federal government refused to charge them with civil rights violations.

City Corporation Counsel Michael Cardozo said in a statement, “The Sean Bell shooting highlighted the complexities our dedicated officers must face each day. The City regrets the loss of life in this tragic case, and we share our deepest condolences with the Bell family…We hope that ll parties can find some measure of closure by this settlement.”