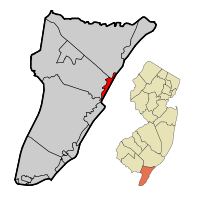 Sea Isle City, NJ – A portion of the racial discrimination suit filed by a black family against Sea Isle City, its police department and the school board was settled Wednesday, July 21, 2010, as reported by The Philadelphia Enquirer. The Jersey shore town and its police department will pay $550,000. The portion of the lawsuit against the school board and certain teachers is still pending.

The settlement was entered Wednesday in federal court in Camden.

Doretha Waters-Rice, her son and granddaughter filed the lawsuit in 2004, alleging the children were subjected to racial slurs by teachers and that the granddaughter was excluded from a Christmas play on account of her race.

The suit further claimed that police officers responded to the family’s complaints by filing false criminal charges against Waters-Rice and harassing her.

The family left the city years ago and did not want to comment on the case.

The family’s attorney explained, “It’s been a very emotional and difficult experience, and obviously unpleasant…They’re pleased they went to court and achieved a meaningful settlement for this part of the case, and they’re hopeful the rest will be resolved soon through trial or settlement.”

The defendants’ attorneys were either unavailable or declined comment.