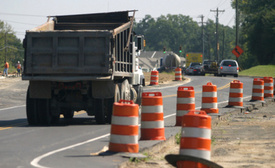 Westminster, MD – A collision between a garbage truck and Saturn on Tuesday, July 20, 2010, resulted in the death of a 19-year-old, as reported by The Baltimore Sun. The area on Maryland Route 27 was closed for four hours as investigators worked the scene.

Nicholas Louis Vidi of Sykesville was traveling northbound on Route 27, south of Kate Wagner Road in Carroll County, when his car veered into the southbound lane. It struck the garbage truck driven by Jeannette Zelaya of Westminster, according to police.

Two other vehicles following Vidi became involved in the accident after the initial collision. Barry Mulligan’s 2000 Honda Civic avoided hitting Vidi’s Saturn, but was struck by a fourth car driven by Lori Ann Lowe of Westminster.

Vidi suffered severe injuries and was pronounced dead at the scene.

The accident remains under investigation.