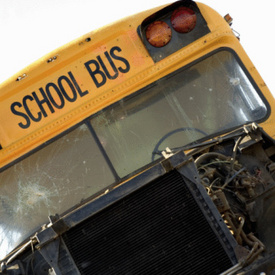 Hartford, CT – A Glastonbury teen was arrested Tuesday, July 20, 2010 in connection with a January school bus crash that left a student from Rocky Hill dead, as reported by WFSB.com.

Christopher Toppi, 17, was charged with negligent homicide with a motor vehicle, failure to drive in the established lane and speed too fast for the conditions, according to police.

Vikas Parikh, 16, was killed when the bus he and 17 others were traveling in collided with a Volvo before falling 20 feet off the highway and landing in a ravine in Hartford on January 9. According to the Boston Globe, the bus and car collided while merging into the same lane of Interstate 84.

Toppi turned himself in Tuesday morning after learning of a warrant for his arrest. He was released on $2,000 bond and is scheduled to appear in court on August 2.

Police reported they do not anticipate making any more arrests.

According to Toppi’s defense attorney, the school bus driver should face charges for the fatal crash as well, rather than the $126 fine he was assigned.

Toppi’s lawyer also believes the boy, who was 16 at the time, did not do anything wrong.