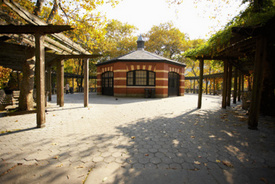 New York, NY – A six-month-old girl was killed and her mother was seriously injured by a large, healthy tree branch that fell on top of them as they posed for a picture at the Central Park Zoo on Saturday, June 27, 2010, as reported by the New York Post. The accident occurred as the baby’s father was taking a picture of the two.

The limb was approximately 18 inches in diameter and four feet long, according to reports. It fell from a height of approximately 25 feet. The girl’s mother, 33-year-old Karla DelGallo, was listed in critical but stable condition at New York-Presbyterian Hospital/Weill Cornell Medical Center on Sunday.

The baby girl is the second person to be killed by falling tree limbs in the park this year. While the accident could be viewed as a freak occurrence, the city is currently facing questions and a few lawsuits as to whether the falling branches are preventable.

The New York Times reported the city admitted to not knowing who was responsible for maintaining the trees.

According to The New York Times, the Central Park Conservancy, a private nonprofit group, is generally responsible for the 26,000 trees that are throughout the park. Upon questions from the press, officials at the conservancy would not state whether or not they were responsible for the tree involved in the baby’s death. The organization stated it is conducting its own investigation.

The group then referred questions to the police or the zoo’s operator, the Wildlife Conservation society. This organization is responsible for the zoo and its environs. This group too, neither denied nor confirmed accountability for the tree.

Park officials have explained that it is impossible to ensure the safety of every tree branch in the park.

Regardless of officials’ claims that ensuring 100 percent tree safety is impossible, lawsuits are already in progress regarding other tree-related injuries in the city.

One current lawsuit consists of complaints from a Brooklyn man who was killed by a falling branch in February. It claims that the conservancy was negligent in removing the tree. In this case, the tree had been deemed a hazard and a high priority for removal two months prior to the accident.

Another lawsuit, which is pending, concerns a man who was struck in the head by a rotting four-inch-thick branch in July. This man survived, but sustained brain and spinal damage from the accident.

The Wildlife Conservation Society and the Central Park Conservancy issued statements of condolences to the family. Neither group has claimed responsibility for the maintenance of the tree.