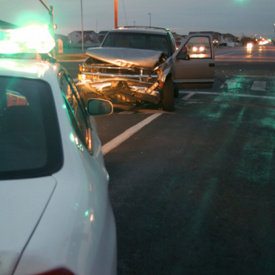 Keene, NH – A three-vehicle crash on Route 9 in Keene left one person dead and several people injured on Monday, June 28, 2010, as reported by WMUR.com. The crash reportedly happened at approximately 2:56 p.m.

Investigators reported Richard Clark, 34, of Townshend, VT, was driving westbound on Route 9 when he collided with a northbound vehicle. The northbound vehicle was coming from Base Hill Road, according to reports.

The crash pushed the northbound vehicle off the road and Clark’s vehicle into another stopped vehicle at the intersection.

The stopped vehicle was driven by Richard Vesper, 61.

Paramedics reported the driver of the second vehicle, the one that was pushed off the road, was pronounced dead at the hospital. His identity was not released.

Police reported Clark had several people in his vehicle at the time of the crash. All passengers suffered multiple injuries. They were transported to Dartmouth/Hitchcock Medical Center and treated.

Paramedics reported Vesper and his wife were fine after examining them.

The crash remains under investigation.