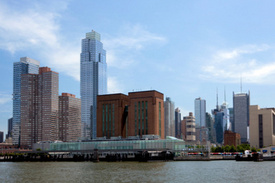 New York, NY – An Upper West Side woman was charged with attempted murder Tuesday, May 11, 2010, after she threw her 19-month-old daughter off a pier into the Hudson River, and then jumped in behind her in a suicide attempt, as reported by The New York Times.

Devi Silvia, 33, faces charges of assault, reckless endangerment and endangering the welfare of a child after her alleged murder-suicide attempt.

At approximately 11:30 a.m. Tuesday, Silvia, distraught from a fight with her husband, ran to the pier at West 70th Street and threw her little girl into the cold waters of the Hudson River. She then plunged in herself. The child was swept down the river before she was rescued near 59th Street by emergency responders. Silvia was pulled out nearby as well.

Both mother and child were transported to New York-Presbyterian/Weill Cornell hospital. The mother was treated and released to authorities. She underwent a psych exam at Queens Elmhurst Hospital.

It was reported by the New York Post that Silvia was unhappy living in the United States because her husband worked long hours and often visited his sick mother.

Police questioned the husband when he arrived at the scene shortly after the rescue. He told authorities he and Silvia had just fought.

The child is reportedly walking and well.