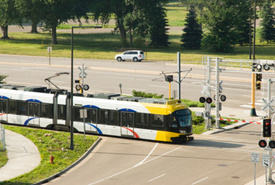 Philadelphia, PA – A 61-year-old woman was rushed to Temple University Hospital Thursday, May 6, 2010, after her vehicle was hit by a SEPTA regional train, as reported by NBC Philadelphia.

The crash happened at approximately 7:15 p.m., at the intersection of Indian Queen Lane and Cresson Street in the East Falls section of Philadelphia. According to officials, a Norristown-bound SEPTA R6 train carrying 250 passengers was nearing destination when it hit the woman’s car.

Witnesses to the event stated the car was stopped between railroad crossing arms that had dropped when the train hit the car on its driver’s side. The small Toyota was thrown several feet into two parked cars before landing on its roof.

Firefighters and police worked to get the woman out of the mangled car. She was transported by ambulance to Temple University Hospital and admitted as a trauma patient.

No one on the train was injured, but some were stranded in the area while crews cleaned the accident. A kind neighborhood resident and passenger on the bus brought some people dinner.

Service to the track resumed at approximately 9 p.m., according to SEPTA officials.

Police are conducting an investigation to determine whether the woman intentionally tried to beat the train. If their suspicions are correct, she may face citations.