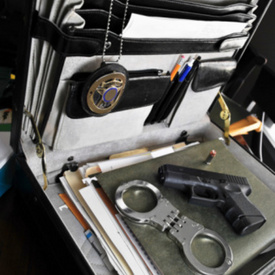 New York City, NY – An eight-year NYPD officer was charged Thursday, April 6, 2010, with selling his badge and handing over his gun and other police equipment to a gang of men who were robbing drug dealers, as reported by New York Daily News.

Emanuel Tavarez, 30, took part in at least four of the stickups, acting as a lookout for the band of robbers. He pleaded not guilty to his charges as they were read off to him in Brooklyn Federal Court Thursday.

Tavarez is being held without bail and faces life in prison if convicted of all charges.

A Drug Enforcement Administration (DEA) special agent stated, “The crimes alleged to have been committed by Emmanuel Tavarez are a slap in the face to the vast majority of law enforcement officers in New York City who are dedicated to upholding the law.”

Tavarez and 15 other crew members have been charged with committing over 100 robberies of drug dealers in New York City, New Jersey, Connecticut and Pennsylvania.

Tavarez is related through marriage to four of his co-defendants. He is accused of providing the gang with NYPD raid jackets, his police utility belt, holster, and bulletproof vest so they would look like actual officers. He is also believed to have handed his gun over on more than one occasion.

It is alleged that the crew also had a vehicle that was customized with police-style lights and a speaker.