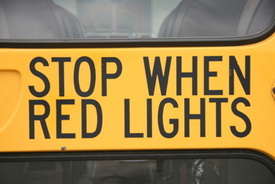 Rochester, NY – A T-bone crash between a school bus and a car on Tuesday, May 4, 2010, resulted in 10 people being taken to area hospitals, as reported by the Democrat and Chronicle.

The collision occurred at approximately 2:43 p.m., at the intersection of N. Clinton Avenue and Cumberland Street. The elementary school children were headed home from School No. 12 on South Avenue.

The bus was traveling north on Clinton when it collided with a woman driving East in a sedan on Cumberland. While the investigation is still underway, the woman reported to News 10 of Rochester, that she had a green light and the bus ran its red light.

La Ron Singletary of the Rochester Police Department told reporters, “We’re still trying to figure that out to see who was wrong and who was right as far as the accident goes.”

Firefighters and other responders removed the children from the bus through the back door. Many were pulled out on stretchers. All are expected to be fine.

As of Tuesday, May 4, no citations had been issued. Police do not suspect drugs or alcohol involvement, either.