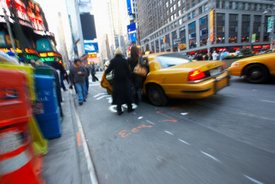 Manhattan, NY – Police are searching for the man who was caught on a surveillance tape moments after an SUV loaded with fertilizer, fuel and explosives was abandoned on W. 45th St, Saturday, May 2, 2010 as reported by New York Daily News.

Police Commissioner Raymond Kelly told reporters Sunday that security cameras captured a white man, approximately in his 40s, leaving the scene near the bomb-filled Nissan Pathfinder. He told reporters, “The intent was to cause a significant ball of fire,” and “It’s a sobering reminder that New York is clearly a target for people who want to come here and do us harm.”

The Pathfinder was discovered at approximately 6:30 p.m., Saturday, after a Vietnam veteran and T-shirt vendor saw the vehicle, and thought it suspicious and reported it to a mounted police officer.

Officer Wayne Rhatigan, a 19-year-NYPD veteran, peered inside the vehicle, noticed a box that was exuding smoke and reported smelling gun powder. Authorities then evacuated the area.

Once police opened up the SUV, they found tens of M-88 firecrackers, three tanks of BBQ-style propane, two red plastic containers of gasoline and a metal locker densely packed with supermarket-grade fertilizer. The fertilizer was not explosive grade.

The explosive unit was wired with two alarm clocks set to go off at the same time. One was wired to blow up the propane tanks while the other was wired to trigger the contents of the locker (nonexplosive fertilizer).

Homeland Security Secretary Janet Napolitano said the incident was being treated as a possible terrorist attack, but explained that it could also be a single attacker.

Preliminary investigations are looking into why exactly the bomb did not detonate.

Authorities are skeptical the attack was part of any Al Qaeda or other known terrorist organization plot.