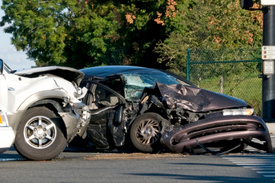 Legal news for Maryland automobile accident attorneys – Fire officials and police responded to a 4-vehicle crash that trapped two in their cars and injured a total of 7.

Prince George, MD (www.NewYorkInjuryNews.com) – Four vehicles were involved in a crash on Route 197 Tuesday, April 27, 2010, resulting in seven people being hospitalized, as reported by The Washington Post.

Prince George County Fire Department reported the crash began as a head-on collision between two automobiles when one tried to avoid hitting a school bus. While the two drivers became trapped inside their vehicles, the collision triggered a secondary pile up involving two additional vehicles.

Five more people were hospitalized with minor injuries. An adult woman, juvenile male, two teenage males and another teenage female were the victims. Three other individuals were evaluated at the site of the accident but refused transport to the surrounding hospitals.

The four-vehicle collision resulted in police closing off Route 197 in the Bowie area near Grason Lane.

Details are unclear as to how the additional cars became involved in the accident.

A school bus was at the scene but was not reportedly involved in the crash. It had no students on board at the time.