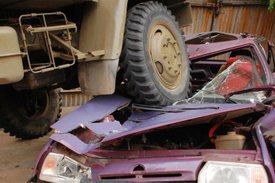 Ossining, NY (www.NewYorkInjuryNews.com) – A weekend crash involving a Nissan Altima and a Freightliner tractor-trailer left two dead and one hospitalized with non-life threatening injuries, as reported by LoHud.com.

According to reports from the Pennsylvania State Police, the Altima crashed into the rear of the tractor-trailer on Interstate 80 in Mifflin Township, Pa., at roughly 12:23 a.m. Saturday. The vehicles had been traveling west. The three people in the Altima, students at SUNY Stony Brook, were traveling to see a Penn State game.

Sean Finnegan, 21, of Lynbrook, NY, was the driver of the Altima. Paul Richards, 18, of Santa Cruz, CA, was a front seat passenger. Both were pronounced dead at 1:40 a.m. by a Columbia County Deputy Coroner.

Ossining resident, 21-year-old Stanislav Gomberg, was the sole survivor riding in the Altima. He is a 2007 graduate of Briarcliff High School and a junior at Stony Brook. Gomberg’s father told reporters Stanislav was conscious and talking after the crash. He reportedly remembered the majority of the accident.

The driver of the tractor trailer, Ricky Ray Yates, was not injured.