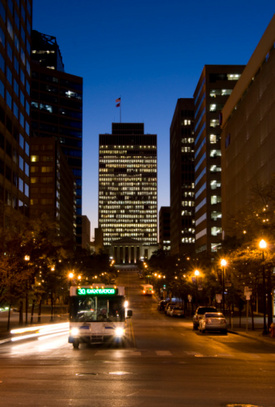 Legal news for Massachusetts automobile accident attorneys – A car struck a pole and then a bus carrying two passengers, one of whom was in a wheelchair, sending 3 to hospital.

A crash between a car and MBTA bus resulted in 3 people injured.

Boston MA (www.NewYorkInjuryNews.com) – A car traveling down Commonwealth Avenue hit a pole and subsequently crashed into the rear of a MBTA van, Wednesday April 21, 2010, injuring three people, as reported by WHDH-TV.

The MBTA “The Ride” van was parked in Kenmore Square just after midnight to unload two passengers, a woman in an electric wheelchair and her caregiver. The women were returning from a Celtics game.

When the car hit the van, the woman in the wheelchair tipped over and the van’s driver was hurled about 10 feet through the air. The caregiver escaped injury.

Both van driver and handicapped woman were hospitalized. The woman in the wheelchair broke her arm and may require surgery, according to reports. The driver’s injuries were non-life threatening.

The car that smashed into the bus sustained serious damage to its front end. A passenger in the car was transported to the local hospital for evaluation as well.

Reports from My Fox Boston indicated a passenger in the car fled the scene.

While no arrests were made, the investigation remains underway.