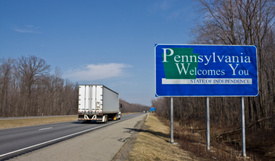 Legal news for Pennsylvania 18-wheeler accident attorneys – A tanker carrying nitric acid overturned along a dangerous bend of I-79, spilling its contents.

Washington, PA (www.NewYorkInjuryNews.com) – A tanker carrying a load of nitric acid crashed and overturned Monday, April 19, 2010 on Interstate 79, as reported by The Pittsburgh Channel.

According to reports, the truck overturned near Exit 21 on the Interstate, leaving traffic backed up for miles, which lasted for hours.

A video from local news broadcaster, Sky 4, showed skid marks along the stretch of highway where the accident occurred. The Pennsylvania State Police closed the northbound lanes of I-79.

The driver of the truck required assistance to get out of the truck and was placed onto a stretcher. He was transported to a local hospital. As of Tuesday, April 20, 2010, there was no word on the driver’s condition.

According to authorities, Monday’s accident was not the first of its kind in the same area of Interstate 79. There have been several fatal crashes at exit 21, due to apparent difficulties in maneuvering the bend.

Every year, trucks carrying dangerous materials are involved in 5,000 highway collisions. On the week of April 12, 2010 Pennsylvania State Police ordered 148 of 1,348 trucks that had been stopped for inspection off the road.