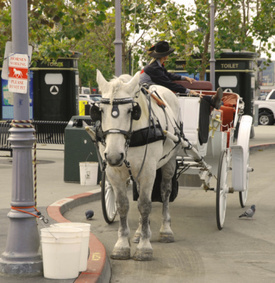 A Philadelphia crash between horse-drawn buggies and a car injures three.

Philadelphia, PA (www.NewYorkInjuryNews.com) – A car collided with several horse-drawn carriages near the Independence Mall in Philadelphia on Monday, April 19, 2010, damaging a few carriages and sending horses running, as reported by the Philadelphia Enquirer.

At approximately 9:20 a.m., at 6th and Race streets, a 70-year-old driver, identified as Thomas Gordon, of Claymont, Del., crashed into the back of three carriages stopped at a red light. This collision spurred a chain reaction that damaged two other buggies who were stopped at the light as well. All five horse-drawn carts had left the sables 15 minutes before the accident.

According to Michael Kates, director of operations for the 76 Carriage Co., the drivers of the two buggies at the rear of the line who were directly hit by Gordon were ejected from their posts. They were transported to Thomas Jefferson University Hospital and reported to be in serious but stable condition. The two injured parties suffered head and other injuries, but were expected to fully recover.

Gordon was transported to Hahnemann University Hospital and reportedly in stable condition.

The other three carriages carried four other employees. Two were treated and released, and two did not require treatment. There were no passengers on board.

Five horses were involved in the crash as well. While all five beasts of burden escaped serious injury, three of them got out of their harnesses and ran a half-block down the street before people on the street corralled them.

Thomas Gordon was not facing criminal charges, as of Tuesday, pending the results of a toxicology test, according to police.