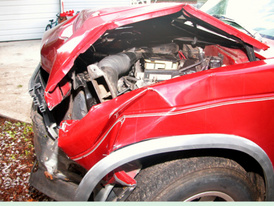 A Toyota Tundra, driven by Jeffrey Scheinblum, 43, of West Hartford, struck Thomas Clynch IV, 25, of East Windsor and Cheryl Malliet, 60, of Avon, as they were walking on the sidewalk on the north side of Boulevard.

The 2000 Tundra allegedly ran off the north side of Boulevard and hit a guardrail and the bridge that runs over Trout Brook. It then continued west and struck the two pedestrians before crossing the roadway and crashing into the center island at Boulevard and Raymond Road. The truck finally came to a stop in some nearby bushes.

Authorities are investigating whether Scheinblum suffered a medical problem while driving.

Police closed Boulevard for several hours while they investigated. They reopened the road at approximately 2:30 p.m.

Authorities have asked for any witnesses with information on the crash to contact the West Hartford police traffic division at 860-523-2007.