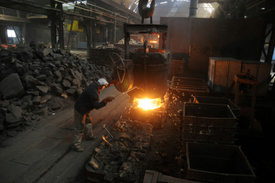 Legal news for Pennsylvania employment lawyers: A 20-year employee at a Victaulic plant in Lower Macungie Township was killed after a molten metal explosion.

Lower Macungie Township, PA (www.NewYorkInjuryNews.com) – A woman who was badly injured in a furnace explosion at the Victaulic plant died Thursday, April 15, 2010, after receiving burns covering 75 percent of her body, as reported by WFMZ.com.

Lehigh county Coroner says 37-year-old Bridget Geist of Walnutport died at approximately 6:30 p.m. Thursday. An autopsy is scheduled to determine her exact cause of death.

The explosion happened Monday morning, according to fire officials. It appeared a vessel containing molten metal erupted, spewing the metal inside Victaulic’s Lower Macungie Township, Lehigh County Foundry. The exact chain of events that led to the explosion was undetermined, as of Thursday, April 15.

According to reports from The Morning Call, Geist was hurt at 8:30 a.m. A second Victaulic worker tried to help her and resultantly received burns. Both injured parties were rushed to Lehigh Valley Hospital immediately after the incident.

A third employee was treated and released on Monday as well. Officials explained he was distraught over what he had witnessed.

Victaulic has stopped production at the Lower Macungie Township facility until it can be proved a safe environment.

State police were first to begin an investigation into the accident, but then turned the investigation over to the U.S. Occupational Safety and Health Administration (OSHA).

Geist had worked at the facility for 20 years.