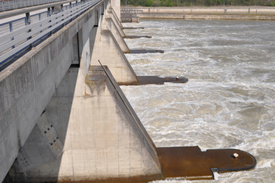 Legal news for Pennsylvania wrongful death attorneys – Two men died on the Allegheny River after the boat they were fishing on near Lock No. 3 capsized.

A boat in the Allegheny River was in unsafe waters, but was never warned by officials.

Harmar Township, PA (www.NewYorkInjuryNews.com) – A boat capsized in the Allegheny River, near Lock No. 3 in Hamar Township on Saturday, April 10 2010, and killed two men, according to reports from ThePittsburghChannel.com. The accident happened at approximately 2:30 p.m.

The victims, Gary Watson, 59, of North Huntington, and Brian Abercrombie, 26, of California, were out for the day with Watson’s son Cale, 30. They had apparently been fishing for hours before the accident. When the boat overturned, Cale Watson made it to shore. Witnesses said the two others kept clinging to the boat, which eventually lead to the fatalities.

A witness reported, “One guy seemed like he got (snagged) up and the boat just got pulled into the dam. The nose of the boat hit and it backed off a little bit, and as soon as that boat turned sideways, the two gentlemen, or all three of them, went into the water because the boat just flipped them completely in.

The U.S. Army Corps of Engineers operates 23 dams in the area. In May 2009, the corps distributed buoys throughout the area in attempts to notify the boaters of dangerous areas. There are also alarms to notify those who have gotten too close to the dams and turbulent waters.

Witnesses reported they never heard any alarms. Lock personnel admitted to seeing the boat outside the safe zone.

Another witness to the accident, Albert Pulice Jr., of Murrysville told reporters “When we’re on a boat…and we get too close, they tell us…Today we were there for three hours and I watched them. They (officials) didn’t honk once.

The accident is under investigation.