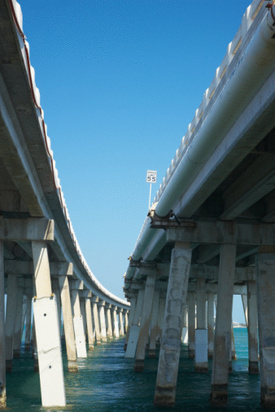 Legal news for Connecticut workers compensation lawyers – A worker was blinded after a piece of rebar fell on him, permanently blinding him. OSHA cites and fines contractors.

New Haven, CT (www.NewYorkInjuryNews.com) – Two companies that worked on the Long Wharf flyover bridge were cited for a “serious” safety violation that left a worker blind, as reported by the New Haven Register. The Occupational Safety and Health Administration, (OSHA) www.osha.org has issued fines of $5,000 a piece.

On October 30, 2009, rebar that was used to reinforce the concrete pier was not properly secured and fell over onto Fernando Fernandez of West Haven. The man suffered a broken leg, punctured lung and brain injury that left him blind, according to his son.

After undergoing rehabilitation at Gaylord Hospital in Wallingford, Fernandez is reportedly doing better. He will be permanently blind though.

Walsh Construction, of Salem, Mass., is the primary contractor for the bridge. The rebar wall was being built by the subcontractor, Advance Steel Reinforcing of Bridgeport. The companies were given the same citations stating, “The employer did not ensure that reinforcing steel walls were adequately supported and or braced to prevent collapse.”

The subcontractor was further cited for failing to ensure all employees were properly trained in the hazards related to the work being performed and the proper preventative measures were in place.

OSHA’s Bridgeport area director, Robert Kowalski, told reporters that he met with Walsh Construction executives Tuesday and that, “Walsh is contemplating the settlement agreement that I offered. They don’t know whether they’re going to contest it or not.”

Kowalski also met with Advance Steel Reinforcing of Bridgeport. OSHA expects an answer in response to the fines by Friday, April 9, 2010.

If the companies chose to contest the settlement, they may have to go to court.