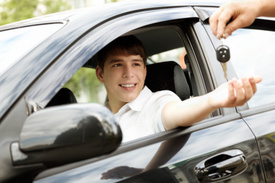 Trenton, NJ (www.NewYorkInjuryNews.com) – The New Jersey Graduated Driver License Program is a state program that requires persons under the age of 21, whom have never had their license, to complete a period of supervised driving before obtaining a basic driver license. The system introduces driver privileges in phases.  According to reports from a recent study, the program is paying off with substantial decreases in teen crashes and injuries, as reported by the Asbury Park Press.

According to the program’s website, which was created by policymakers and the Brain Injury Association of New Jersey, drivers are not only required to complete chaperoned hours, but face a number of restrictions:

If violations occur, the driver faces a fine of $100 and possible license suspension. The driver also may not plea-bargain any point-carrying offense.

The website and APP report that changes will be implemented on May 1, 2010. For those with the GDL license, the curfew will become 11:01 p.m. to 5:00 a.m. and the name of the provisional license will be newly labeled as “probationary.” Furthermore, GDL participants will be required to display a decal on the vehicle’s front and rear license plate stating GDL status.

There will be no grandfathering of existing permit and provisional license holders.

The changes are part of the state’s attempts to increase the involvement of parents and parental figures in the teen-driving process. A bill is currently in the works that would require parents of under-18 drivers to attend a driver orientation course. It would also increase the driver license provisionary period from six months to a year.

The report concluded, “Substantial reductions were observed in all police-reported crashes, injury-only crashes and fatal crashes of 17-year-olds in New Jersey subsequent to GDL implementation…There is good evidence from this study that the nighttime restriction has been an effective GDL component.”