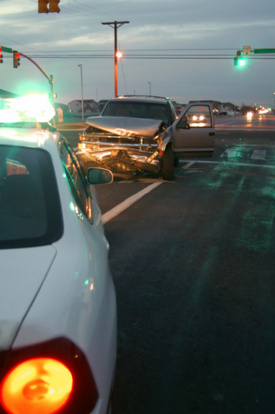 Grandfather of 14 killed after police chase results in crash.

Vineland, NJ (www.NewYorkInjuryNews.com) – An 81-year-old businessman was killed Tuesday, March 30, 2010 after a stolen paramedics’ SUV crashed into his minivan in Vineland, as reported by www.philly.com.

Alfred Costantino, a father of eight and grandfather of 14, was “still working like a laborer,” according to his son. He was reportedly on his way to a work-related meeting when the stolen SUV, running from police pursuit, crashed into his minivan shortly after 9 a.m at the intersection of Holmes and Chestnut Avenues..

The driver, Michael A. Jones, of Bridgeton, N.J., heisted an Underwood-Memorial Hospital SUV from the Franklinville Fire Company in Franklin Township and plowed it into Costantino’s van. He was held in the Cumberland County Jail on a $750,000 bail. He was charged with felony murder, aggravated manslaughter and vehicular homicide. Jones’ arraignment is scheduled for Friday, April 2, 2010.

According to reports, the 2000 Dodge Durango was reported stolen at approximately 8:20 a.m. Shortly after, at approximately 9 a.m., Vineland police received a report that the stolen SUV could be in their jurisdiction.

The first officer to see the vehicle pursued the chase for less than two-tenths of a mile before losing contact.

The second sighting happened near Delsea Drive and Chelsea Avenue, but the pursuit was called off because a middle school in the area had heavy traffic.

Shortly after, Jones crashed into Costantino. He would have celebrated his 55th wedding anniversary next month, according to one of his sons.