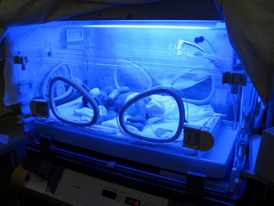 Wilmington, DE (www.NewYorkInjuryNews.com) – A Superior Court jury found a New Castle doctor responsible for the brain damage suffered by a jaundiced newborn and ordered her to pay the family $6.25M, as reported by www.delawareonline.com.

The jury found that Dr. Phyllis James was negligent in properly treating jaundice, which resulted in the child’s brain damage, cerebral palsy and other lifelong complications.

According to court papers, Letoni Wilson gave birth to Tirese on July 17, 2006, without complications. Wilson later became worried about his yellow complexion and took him to see Dr. James at her facility, New Castle Family Care on July 21, 2006. An earlier child of Wilson’s that was also treated by James had issues with jaundice shortly after birth.

Two days later, the jaundice became more pronounced and the boy was lethargic. Wilson telephoned James’ office and was told by a physician’s assistant to bring him in the next day. Wilson instead took the boy to the hospital an hour later, where he was found to have toxic levels of bilirubin in his system. By that time, the damage was irreversible.

Wilson’s lawyer stated that James “should have tested the child’s bilirubin level and initiated phototherapy. She did neither.” The attorney further states that if the child had been treated quickly, the condition would have almost immediately been cured.

The doctor testified that the baby’s skin was “yellowish” but his eyes were white and he was active, giving her no cause for alarm. James also told the court she gave the mother instructions that neither the mother nor an assistant who was present at the time, remember hearing.

The money from the jury award will be placed in a trust for the child to be used for his care, according to the family’s attorney.