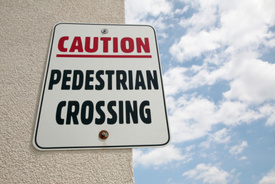 New York, NY (www.NewYorkInjuryNews.com) – A Bronx preschooler was taken to New York Presbyterian Hospital Columbia after being struck by a pole while at a cross walk on March 22, 2010, as reported by New York Daily News.

Joshua Delarosa, a 4-year-old boy, was en-route to the Growing Happy day care, with his mother, Romula Fernandez, at 8:30 a.m. The two were stopped at a pedestrian crossing sign when a cab swerved and slammed his car into the pole holding the sign, which then toppled over onto the boy. The boy’s mother suffered cuts and bruises and was taken to St. Barnabas Hospital.

Livery cab driver, Jonathan Urena-Martinez, is the man who hit the sign. He was driving south on Broadway when a Department of Environmental Protection truck headed north made a left turn in front of the oncoming cab. He claims he swerved his car in order to miss hitting the truck as it turned left in front of him. Urena-Martinez claims the truck cut him off and should have waited for him to pass.

The school crossing guard, who did not give her name, told reporters the cab appeared to be traveling very fast.

The DEP truck driver, Lloyd George, blamed the cabbie, stating, “He had enough time to stop.”

As of Monday night, doctors were working to save the boy’s life, who remained in critical condition at New York Presbyterian Hospital Columbia.

Police said neither man faces criminal charges thus far. Family members are praying for the boy and loved ones are outraged at the lack of fault being placed on the drivers.