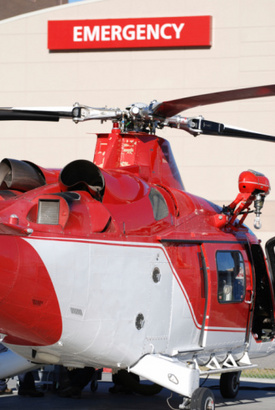 Erie, PA – Hamot Medical Center, in Erie, PA is facing a wrongful-death lawsuit that claims the hospital mis-labeled itself as a trauma center, leading to the unnecessary death of a 2008 motorcycle crash victim, according to Erie Times-News. John P. Heynoski suffered blood loss that eventually lead to his death while waiting for a helicopter to transport him to a different hospital.

The lawsuit, filed on Friday, March 19, 2010, on behalf of John’s wife Jospehine Heynoski, charges the hospital ran out of blood while treating John for his injuries. It further includes that labeling itself as a trauma center was incorrect, as it did not have qualified staff available to treat the patient’s pelvic injuries. The hospital supposedly gave Heyoski transfusions of the wrong types of blood while waiting two hours on a helicopter transport.

On July 24, 2008, Heynoski was rushed to Hamot after his Pit Bull motorcycle struck a Chevrolet Lumina that had pulled in front of him. The collision happened shortly before 4:30 p.m., police reported. Hamot arrived at Hamot Medical Center at 4:49, conscious and talking. Emergency room staff determined that he had a broken pelvis and internal injuries in the region.

Doctors fist planned to operate on Heynoski’s injuries in-house, but the radiologist on hand admitted to being uncomfortable working on pelvic vascular injuries. At 5:30, 41 minutes into Heynoski’s stay, doctors decided to transfer him to Allegheny General Hospital in Pittsburgh. According to the lawsuit, this second facility could have provided him with adequate amounts of blood and qualified doctors.

Helicopter transport took two hours to arrive because of mechanical problems and inclement weather. While waiting on transport, the patient, who had O-negative blood, received multiple transfusions of O-negative, O-positive and AB-positive blood until the supplies were exhausted.

The man died at 8:02, just as the helicopter arrived to take him to Pittsburgh, the lawsuit claims.

As of Monday, March 22, 2010, the hospital had not acknowledged receiving the lawsuit. In response to press inquiries, spokeswoman Lucia Conti stated, “Once it is officially received, it will be reviewed.”

The driver of the Lumina was cited for failing to yield to approaching traffic.