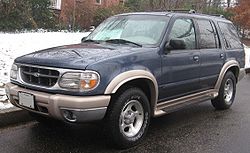 Randolph, MA (www.NewYorkInjuryNews.com) – Massachusetts state police are investigating an SUV rollover crash that happened on Route 93 Thursday, March 18, 2010 at approximately 6:15 p.m. The driver of the 2000 Ford Explorer, a 31-year-old woman from Brockton, and two passengers, ages 11 and 12, were taken to Boston Medical Center with serious injuries, as reported by the Patriot Ledger.

All identities are being withheld until proper family notifications have happened.

Police responded to reports of a single vehicle accident and found the vehicle upside down in the beakdown lane of the highway. A trooper on the scene gathered witness testimonies indicating that the Ford Explorer had been traveling in the second lane to the left of the breakdown lane when a vehicle that has been identified to be a small black sedan cut the Explorer off upon entering the highway. The driver of the SUV proceeded to take evasive action but lost control, resulting in the vehicle rolling over approximately two and a half times, landing on its roof.

Police are looking for any additional witnesses.