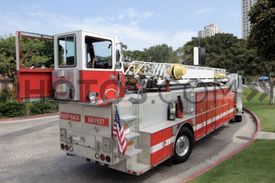 An investigation of a firetruck crash found improper and inadequate maintenance to be cause of break failure and resultant death of Lieutenant.

Boston, MA (NewYorkInjuryNews.com) – An internal Boston Fire Department investigation of a firetruck crash on June 9, 2009 found break failure due to inadequate and improper maintenance procedures to be the cause.  Ladder 26 lost its brakes and barreled down a steep hill, slamming into a Mission Hill apartment building and killing Lieutenant Kevin M. Kelley, who was in the passenger seat.

As reported by the Boston Globe, Boston police investigations cited improper brake adjustments and poor driver training as contributing factors to the crash.   The report, which was released Tuesday, March 9, 2010, found the department negligent in its approach to maintenance and preventative measures. It places blame on Mayor Thomas M. Menino and the department management for short-staffing the firetruck maintenance division, underfunding truck maintenance, and failing to replace aging trucks in a timely manner. Also, findings show that Kelley and two other firefighters riding in Ladder 26 were not wearing seatbelts.

The report also reprimands the Boston City Hall for interfering with hiring decisions when it comes to maintenance work, stating there is “credible evidence” to suggest unqualified individuals were appointed to oversee truck maintenance. The firetruck under investigation had been maintenanced by firefighters who were not properly trained for the work and adjusted the brakes in violation of national safety guidelines.  The driver of Ladder 26 had a small amount of classroom instruction towards driving the truck as well.

The report includes over 100 recommendations for improvement, including speeding up firefighter fatality investigations and mandatory seatbelt use.

The department has since addressed many of the findings, including hiring licensed mechanics to maintain the trucks and instating a preventative maintenance program.