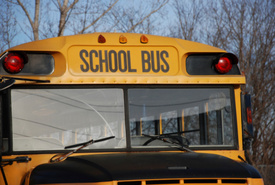 Vineland, NJ (NewYorkInjuryNews.com) – A loaded school bus collided with a car then flipped over at a Vineland intersection sending five to the hospital — including two students— Friday morning, March 5, 2010 according to The Daily Journal. Police reported to the scene of the early morning crash at the intersection of Orchard and Almond Roads, where officials found the school bus on its side off the road.

The crash reportedly took place at 8 a.m. Emergency medical services (EMS) arrived at the scene of the motor vehicle accident. There were two persons traveling in the car were hurt, and two students, along with the bus driver were also injured. The victims appeared to have only suffered from minor injuries, according to responding City EMS chief.

Ambulances transported the five injured victims of the crash to South Jersey Healthcare Regional Medical Center to be treated by doctors and nurses. The identities of the injured were not reported. The school bus was transporting students to Landis Intermediate School right before the accident. Police were not sure how the collision occurred. Police continue to look into the motor vehicle accident to determine the cause. It was not reported how many students were onboard at the time of the crash. There were no citations given out.