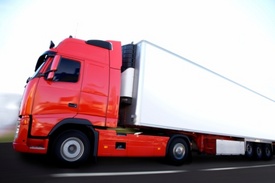 Legal news for Massachusetts truck accident attorneys – A semi truck accident rolled over a car and sent three people to the hospital with serious injuries.

Andover, MA (NewYorkInjuryNews.com) – A tractor-trailer accident crushed one car and sent three people to the hospital with serious injuries, Tuesday afternoon, March 2, 2010, according to NECN.

State troopers reported to the scene where a semi truck collided with a Geo prizm vehicle then rolled over the car, completely destroying it in the southbound lanes under the High Plain Road overpass of Interstate 495. The passenger and the driver in the vehicle were both critically injured, as was the truck driver. A crane was needed to put the big rig upright again. The crash occurred at 3:30 p.m. Tuesday afternoon. Traffic was backed up for hours after the accident so that police could investigate and Environmental crews could cleanup the diesel spill from the truck. Andover firefighters had to extricate the truck driver out of the damaged rig, which had landed in the forested area off the highway.

The truck driver was then taken via medflight helicopter to Beth Israel Deaconess Medical Center in Boston to be treated for injuries. The 17-year-old driver and his 47-year-old passenger, both residents of Attleboro, were taken via ambulance to Lawrence General Hospital, where they were said to be in serious condition. Police said skid marks could be seen for hundreds of feet across the southbound lanes of traffic.