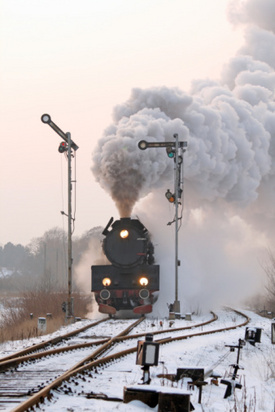 Richmond, VT (NewYorkInjuryNews.com) – A UPS driver was critically injured when he collided with a freight train in December 2009, and he is still on the mend, reported WCAX, March 1, 2010.

Josh Newton was flown to Fletcher Allen Health Care in Burlington where he was listed in critical condition following the tragic wreck. The police reports stated that the UPS truck had slid into the freight train that was traveling at 40 miles per hour. Newtown was found by medical responders unconscious at the scene.

It was also reported that there were no lights on the railroad tracks to alert drivers of an oncoming train. Skid marks in the matted snow and on the dirt road indicated that Newton had tried to stop before the tracks. Police did not say that speed was a factor in motor vehicle accident. Medical professionals cared for Newton while he was in critical condition, as his family and friends continued to support his worried family.

“I didn’t know if he would make it just because of the condition he was in. He was on a breathing machine. It was a rough road for a little while but he pulled through for us,” Newtown’s wife exclaimed. Since that day, Newton has undergone at least seven surgeries since the motor vehicle accident. He continues to exert himself to heal through physical therapy and mental rehab. UPS was expected to conduct an investigation into the serious incident.