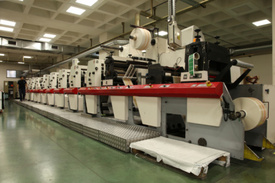 Buffalo, NY (NewYorkInjuryNews.com) – The Occupational Safety and Health Administration (OSHA) www.osha.gov proposed fines for Worldcolor Buffalo for 27 violations of safety and health standards at its printing facility in Depew, New York. OSHA officials went to inspect the company’s plant in October 2009. Officials reported that the inspection revealed multiple health and safety hazards which, left uncorrected, could be harmful to workers.

“OSHA’s area director in Buffalo stated ‘Left uncorrected, they expose workers to the risk of lacerations, amputation, burns, hearing loss, exposure to asbestos, electric shock, or being caught or trapped in confined spaces or operating machinery.’ ” The printing facility lacked a written plan for properly training new employees about the dangers and requirements of the jobs.

In addition, the company failed to inform their employees about asbestos in the insulation found on pipes, and failed to provide a Hepatitis B shot for the employees who work in conditions where they are exposed to blood and potentially harmful bacteria.

The inspection also identified situations at the plant where there was an improper transfer and storage of flammable liquids, lack of protective gear for the workers and inadequately maintained electrical equipment. There was also a collection of combustible dust in the workers area.

WorldColor Buffalo was cited and fined a total of $62,350 in penalties for 27 violations after the inspection. OSHA issued the company 24 serious citations with $61,350 in proposed fines; as well as three other serious violations accompanied with a fine for $1,000 for inadequate record keeping, exposure monitoring and extinguisher training.