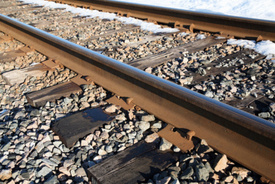 Delaware County, PA (NewYorkInjuryNews.com) — Norwood police authorities reported to the scene where the two sophomores who attended Interboro High School were tragically killed. The two Delaware County teenagers had left their school campus with a friend around 10 a.m. and walked toward the tracks. Around 11:30 p.m., both girls were struck by Acela Express that was headed to Washington D.C. They were reportedly standing on the tracks when the train struck them. The friend went back to their high school and told the authorities what had taken place.

Investigators are looking into whether or not the act was suicide committed by both 16-year-old Gina Gentile and 15-year-old Vanessa Dorwart. One witness reported that he heard the girls screaming and that one was on a cell phone right before the incident. Amtrak closed the four tracks south of Philadelphia for two hours after the fatal accident. Family and friends of the two teens gathered for a candlelight vigil Friday, February 26, 2010 at 6:30 p.m. at the Norwood train station. Police continue to investigate the devastating event.