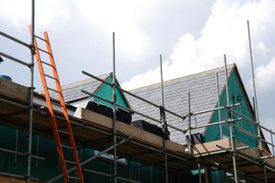 Bourne, RI (NewYorkInjuryNews.com) – A worker was injured when he fell 20-feet to the ground off a ladder at a Bourne construction site Monday morning, February 8, 2010, according to the Cape Cod Times. The worker had been in Plymouth, on a job site, when he reportedly fell off a ladder. The man fell 20 feet down and landed on his chest.

A friend took the severely injured construction worker to a medical clinic after the accident. Fire rescue officials arrived at the clinic where he was then flown to an area hospital for doctors and nurses to treat his injuries around 11 a.m. The man’s condition was not reported. When the friend found the injured worker, he was seriously injured and conscious, and the ladder had broke his fall. His identity was not released. It was not reported if the Occupational Safety and Health Administration (OSHA) officials were going to conduct an investigation.