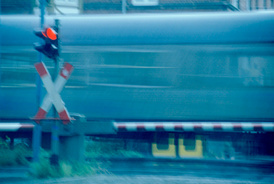 Police and emergency medical services (EMS) arrived at the scene to assist in the tragic crash. Officials reported that the Atlantic City Rail Line service was reportedly delayed until at least 6:30 p.m. Tuesday due to the fatal accident. A New Jersey Transit spokesperson reported that the motor vehicle accident occurred at 1:30 p.m. Monday afternoon at the railroad crossing on Heights Avenue in Camden County.

The Philadelphia bound train had just left the station at 12:40 p.m. and struck the car fatally injuring the 88-year-old Berlin woman. EMS personnel assisted with the fatally injured woman, who was declared dead at the scene. The woman’s name was not disclosed due to pending notification of her family. The passengers on the train remained unharmed and were transferred to another train to continue on to their destination. The Camden County Crash Unit and the Camden County Prosecutors office continue to investigate the fatal motor vehicle accident. It was not known how fast the passenger train was going at the time of the crash.