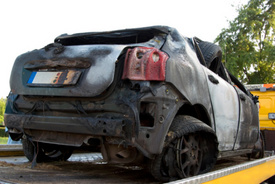 Northampton, NY (NewYorkInjuryNews.com) – A collision between a Suffolk County Transit bus and another motor vehicle fatally injured one and sent 14 more passengers to the hospital Tuesday morning, February 2, 2010, as reported by WNYT.

Police officials responded to the scene of the motor vehicle accident, which took place in eastern Long Island. Police reported that the fatal and tragic crash occurred at 7:40 a.m. near the town of Northampton. It reported that the collision took place when the motor vehicle ran a stop sign and the Suffolk County Transit bus struck it. Emergency medical services (EMS) soon arrived at the scene to treat and transport the injured in the crash.

Paramedics loaded the 14 injured passengers from the bus, and the bus driver into ambulances to be treated by doctors and nurses at area hospitals. Most of the injuries were said to be minor. The identities of the driver and passengers were not given. Sadly, the driver of the other motor vehicle suffered fatal injuries. He was declared dead soon after the wreck. The driver was identified as 21-year-old Michael Brown, resident of Greenport. Police continue to investigate the fatal crash.