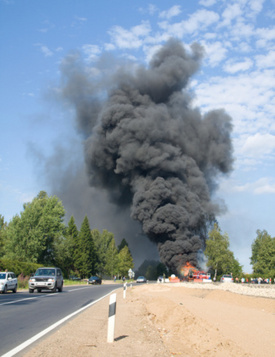 Florence, NJ (NewYorkInjuryNews.com) – A fiery collision turned fatal for one driver on the New Jersey Turnpike, Saturday evening, January, 30, 2010, as reported by 6ABC.com.

New Jersey police officials reported to the scene to assist and investigate the Turnpike motor vehicle accident. Police reported that a tractor-trailer had collided with another vehicle when it burst into flames Saturday evening. The crash reportedly occurred at 11:30 p.m in the northbound lanes of the New Jersey Turnpike. Emergency medical services (EMS) rushed to the scene to treat and transport the injured.

The driver of the semi truck was killed in the impact of the crash and was pronounced dead at the scene by officials. The truck driver was identified as 25-year-old Jovon Holmes, resident of Baltimore. Two of the occupants of the other vehicle involved in the collision were treated by medical officials and then released. It was not reported if they were treated at the scene or taken an area hospital. Authorities reported that the northbound lanes of the pike were closed for nearly eight hours between Exits 4 and 6 for clean up and investigation. Authorities continue to probe the truck accident to determine the cause of the fiery wreck.