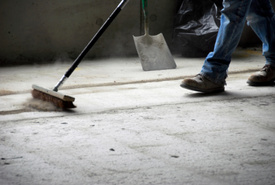 Queens, NY (NewYorkInjuryNews.com) – A New York City sanitation worker was struck and fatally injured by a semi truck while he was working in Queens, Tuesday, January, 26, 2010, according to New York Daily News.

An eyewitness reported that the truck made a wide turn at the corner and just hit him. When CPR failed, the 41-year-old dad was rushed to Mount Sinai Hospital of Queens, where Frankie Justich’s injuries proved fatal at 8:15 a.m. Justich’s left a wife and 1 and 4-year-old daughters. Mayor Bloomberg commented on the accident in a statement, “I know that the prayers of 8.4million New Yorkers are with him and his family.

It was reported that Justich was an 11-year-veteran and had many talents and gifts that he shared with the community. Justich was the 10th sanitation worker to die on the job since 2002. The truck driver was not charged in the fatal and tragic New York City accident.