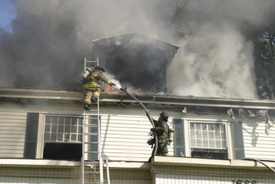 Randolph, NJ (NewYorkInjuryNews.com) – Firefighters reported to a two-story house fire in Randolph Township where one firefighter was injured and an elderly woman killed Wednesday morning, January 27, 2010, according to The Star-Ledger.

Randolph firefighters responded to the blaze on Carrell Road that reportedly began around 11:30 a.m. Firefighters immediately began battling the flames upon arriving at the scene. One elderly woman,who remained unidentified, was fatally injured in the fire.

As firefighters worked tirelessly to combat the growing flames, they still raged on as other units from local townships came to assist. Nearly an hour and a half later, at 1:15 p.m., firefighters were still dumping hundreds of gallons of water on the second floor of the collapsing home attempting to extinguish the destructive flames.

It was reported that one firefighter was injured while battling the blaze. He was taken to be treated at Morristown Memorial Hospital where he was taken care of by doctors and nurses. He did not sustain life-threatening injuries. The firefighters that assisted at the scene were from Roxbury, Dover, Denville, Flanders and Morris Plains. It was not reported what time the fire was brought under control.