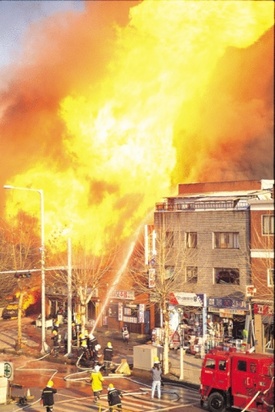 As residents attempted to flee from the surmounting flames and intense smoke, some were trapped in the burning building and were found dead in the rumble after the massive apartment fire was extinguished. One panicked and desperate mother had no way to break through the child safety bars that covered her windows. In hopes that her children would survive, she threw her 2-month-old infant out the window of the third floor, and lowered her second child down in a car seat to firefighters waiting to catch him.

Those who witnessed the mothers heart aching attempt to save her children, made sure that paramedics found both children and took the infant girl to Schneider Children’s Hospital to be treated for a potential traumatic brain injury (TBI). Other residents escaped unscathed from the building they once called home. Other residents died in the building due to the child protective bars on the windows, and one of the floors fire escapes was blocked off by furniture.

FDNY fire officials fought the blaze as the building continued to crumble under the flames and heat. A safety check was performed on the building prior to the blaze revealing that the building did not have smoke detectors. As firefighters continues to dump hundreds of gallons of water on the blaze, the floors began to collapsed onto one another around 2:30 a.m. After nearly combating the blaze for three hours, the flames were extinguished and firefighters found five victims dead beneath the rubble, including the children’s mother. There were a reported 13 firefighters who sustained injuries while battling the three-alarm blaze. Arson is suspected.